In Part 1 of this two-part post, I gave you some examples of performance metrics you should look for when determining whether or not a campaign can become profitable. Part 2 will discuss what you can do with that data and how you can optimize your campaigns to their fullest. 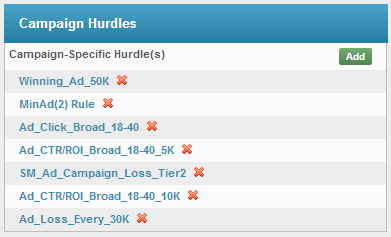 Rule-based optimization, or “Hurdles” as referred in Ppro, is a way of setting up automated tests for creatives based on the amount of data collected.

On the right is an example of Hurdles applied we applied to our campaign featured in a previous POF Gamer Case Study. Once you’ve setup a system of Hurdles, you’ve got an automated system that allows you to grow many more campaigns simultaneously while accurately cutting what’s not working.

Since hurdles can sometimes get complicated, I’d like to share how I set my hurdles to give you an idea of how I find winning creatives and profitable campaigns.

First, I set up 5 basic hurdles for each campaign. Allowing for a significant amount of data, I set a hurdle with a rule which says that if a creative does not receive a click within a certain number of impressions, it gets cut. While I mentioned in part 1 that CTR is not a reflection of a successful creative, it most certainly is an indicator.

With that in mind, I then create a hurdle which takes into consideration whether or not a creative has maintained a certain CTR (typically at least above .100%, depending on the ad size) or if it has generated a conversion. If neither is true, I cut that ad. At a certain point, however, I begin to look mostly at the ROI of that creative.

At a certain point, every creative loses its effectiveness. The final hurdle I then impose is one that forces the creative to maintain a certain ROI over a set period of impressions for an indefinite amount of time. I take into account the campaign’s bid and set a hurdle to cut any creative that’s lost a set amount of money. This way, I can cut any legacy ad before it loses money right from under my nose.

No Such Thing As A Universal Hurdle

Of course, not every campaign has the same performance indicators or metrics. Below are a set of 4 hurdles I apply to some of my 300×250 IAB campaigns:

An example of the above hurdles in action can be seen in Part 1 where even though one creative has a CTR of .748%, it is cut because it has been delivered over 5,000 times and hasn’t seen a single conversion.

While the cut creative just barely missed the cut-off point, it’s important to remember that at a certain bar must be set and adhered to as much as possible. Otherwise, performance can be compromised.

I could let this creative continue to run since the payout for the offer it leads to is over $6.00, but there are so many other creatives with so much better performance, I’ll just hold off on resuming this creative for now.

With Hurdles in place, and with a campaign that’s profitable or near profitable, I then move to the last optimization step which is day-parting.

Once I’ve finally got enough data, I’m ready to day-part. This requires proper tracking and automation. Without those two things, day-parting on a large scale becomes impractical. Luckily, I’m able to select which times during the day when I don’t want my campaign to run with Ppro. Take the below image, for example: 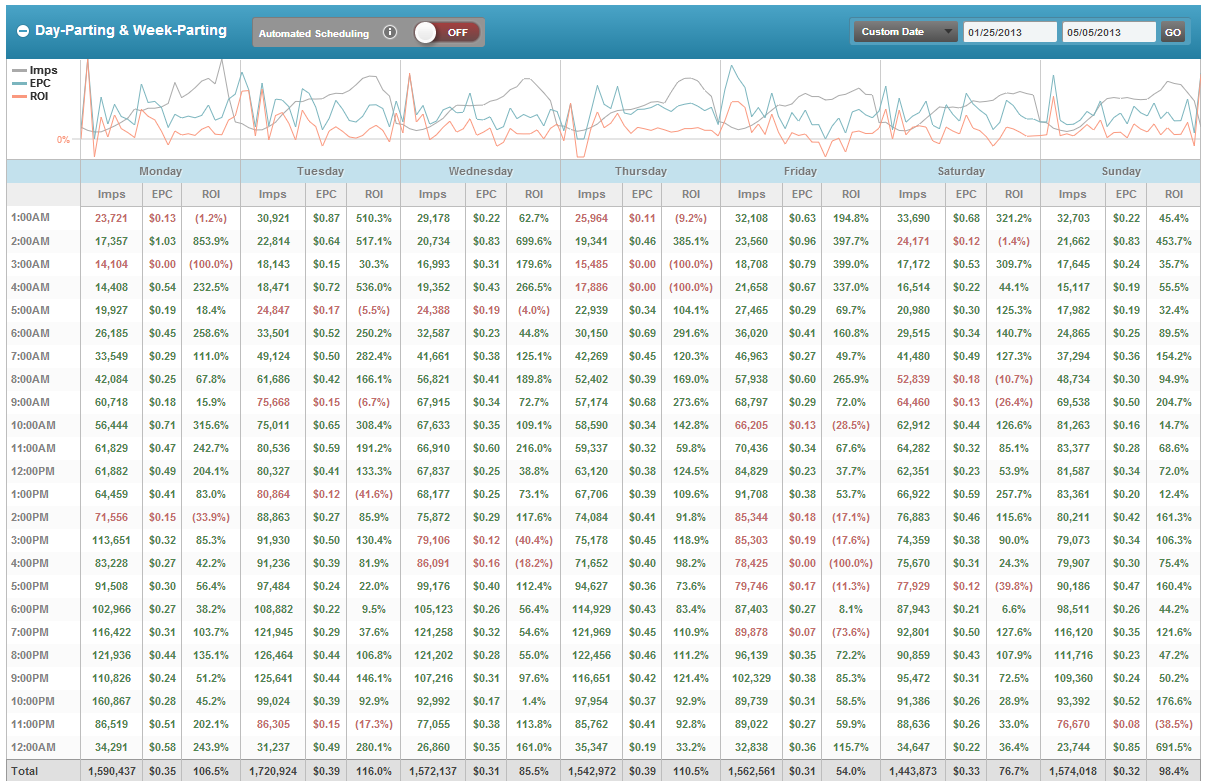 Day parting is considered to be a more intermediate-level strategy employed by performance marketers. It requires some knowledge of traffic trends, statistical significance, and keen observation.

With an automated system, you’ve ruled out a part of the day/week where you won’t bid on certain traffic. Some individuals deploy account-wide day-parting while others (including myself) feel more comfortable with group-wide day-parting and in some cases, day-parting on an individual campaign-by-campaign basis.

When creating a day-parting schedule, you run the risk of pausing campaigns when a potential conversion could occur; and nobody likes the idea of missed opportunities. I like to use a combination of my account-wide day-parting table along with my campaign’s day-parting table to determine which times of the day to run each campaign.

I hope that 2 part overview of metrics was a helpful endeavor. If any of you guys have any questions on setting up automation on Ppro, please don’t hesitate to contact us!