POF Case Study: How High to Bid for Top Placement With 728×90 Wide Banners

In POF, 728×90 “Wide Banners” run in the same locations as the smaller 310×110 and 110×80 “Small Ads”. If you have two identically-targeted campaigns, however, the one running Small Ads will get delivered at an earlier session depth than the one running Wide Banners, unless you raise the bid of the wide banners well beyond that of the small ads. Simply put: Small Ads set at a bid of, say, $0.63 will always appear in an earlier session depth than wide banners set at the same amount.

The question we’re going to try to attempt to answer with today’s case study is: how much higher of a bid would you have to set for Wide Banners than Small Ads in order to achieve the same session depth?

How the Data was Gathered

I set up two separate broad male campaigns with the same targeting. The only difference was one ran Small Ads, and the other ran Wide Banners. Next, I set the initial bids of each campaign to $0.63. The $0.63 bid was when the Small Ads campaign first showed up in the first 5 session depths.

Using a POF user profile, I logged into POF and tracked the creative delivery and what session depths the creatives were delivered for each campaign. We’ll refer to this process as one login. I logged in and followed this procedure 10 times at the $0.63 bid level. For each log in, I refreshed until a session depth of 30 was achieved and in the process, recorded exactly when an ad from each campaign was displayed.

It should also be noted that I monitored creative delivery within a 2-hour period, allowing a 5-minute break in between bid changes to allow the bid increase to take effect.

Below are the findings of just the Wide Banners campaign:

How to Read the Graph

I simultaneously monitored and tracked the session depths of the Small Ads, which were kept at a constant bid of $0.63, and their relative session of delivery to the Wide Banners for each login.

This graph demonstrates our findings: 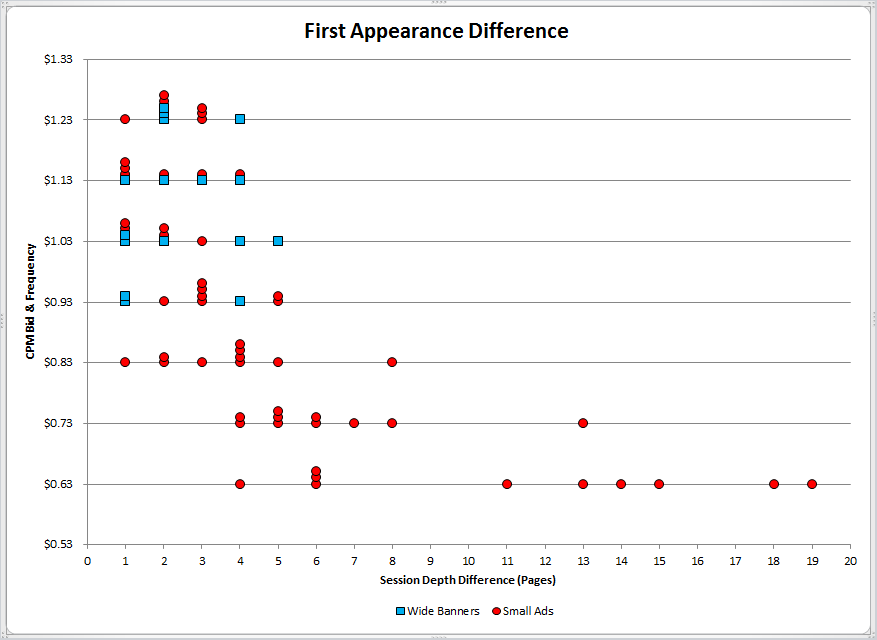 How to Read the Graph

As mentioned above, at a bid of $0.63, Small Ads were granted top placement. As the first graph shows, Wide Banners, when set to the same $0.63 bid as Small Ads, didn’t show up until the 7th refresh at the very earliest.

We also see that, according to the first graph, Wide Banners could not achieve the first 3 session depths until the bid was set at at least $0.83. Even at $0.83, the average session depth Wide Banners showed up in was 7, while Small Ads, of course, were able to achieve top placement with just $0.63.

In addition, according to the second graph, Wide Banners never overtook Small Ads in placement until we set the bid for the Wide Banners campaign to at least $0.93, and even at $0.93, Small Ads were placed first in most instances (as indicated by more red dots versus blue).

This won’t come as a surprise, but in order for the Wide Banners to compete for the same traffic as Small Ads and receive the same amount of traffic, they have to be at a significantly higher bid level. How much higher? At least 50%-70% higher.

The big question then is “Is it worth it?” and for that, I personally say HELL YEAH IT’S WORTH IT! When served properly, these 728×90 banners mean you don’t have to fight for the attention of the user with two other ads! Of course you’re going to need to make sure that you test properly and make sure the payout to your offer can compensate for the increased bid. Just make sure that you’re not serving a turd sandwich to the user so you don’t end up wasting valuable real estate.

Furthermore, the mechanics of how POF serves these ads gives me another reason for why we should never straight up duplicate campaigns for more traffic. When you duplicate a campaign, you may be paying double for the same set of eyes. Your campaigns essentially compete with each other. While the Wide Banners are more expensive, they allow you to place up to 3 Small Ads in them if you so choose. It’s a much better deal than running 2 or 3 of the same Small Ads campaigns for the same traffic.

So don’t be afraid to venture into unknown territory and try your hand at some Wide Banners. Just make sure to increase that bid and capitalize on that space!