How to Split Test Traffic Networks

Everyone should know that when testing an offer that you should always split test and optimize.

Rarely, however, does anyone mention how imperative it is to split-test between different offers, and going even further to split test different traffic networks. I think that split-testing traffic networks isn’t widely discussed because it regards a theory that’s difficult to clearly prove called scraping. Simply put, some networks sometimes can tend to provide higher quality leads than other networks with various offers. This involves numerous factors which are hard to determine. As a consequence of this variance in quality across different networks, you might find that when you split-test between different networks, with the exact same offer and the exact same offer landing page, one network will yield a greater conversion rate and overall ROI than another.

Luckily, with Prosper’s tracking system and the landing page rotation scripts that we provided, you can easily split test between different networks. But to do this properly requires a small amount of organization.

So to do this, I first go to the “campaigns” tab (#3) and I create a new campaign for each network I plan on split-testing. Now, although there is an option to rotate URLs, T202 doesn’t allow you to assign various payouts for different offer URLs. Above that, assigning different campaign names to each network makes it easier to discern between which URL/network confirmed a lead. So you typically would want to set up your information in the campaign tab as such: 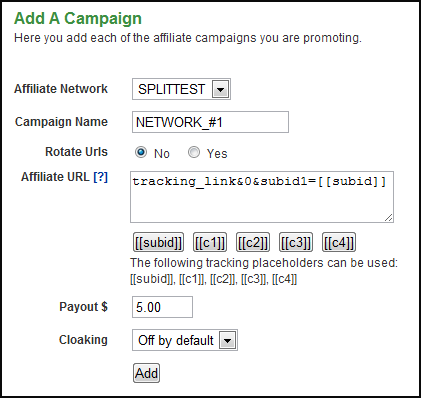 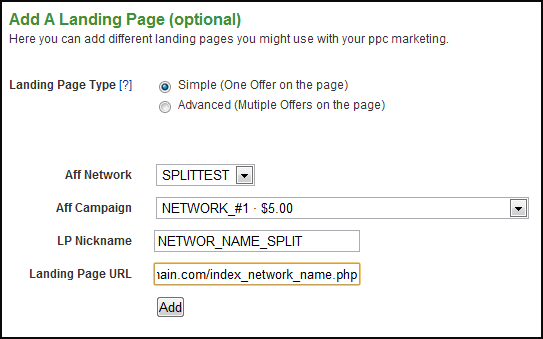 Next, I insert my javascript inbound/outbound scripts into each lander just like if I were simply rotating landing pages as explained in this rotation script walkthrough video. Now when I go to the “overview” tab I can look at the list of campaign names I have and quickly and easily determine whether or not one network is performing better over another.

Although there aren’t really enough clicks to make any sort of definitive conclusion with the above data, as you can see from the image, Network _#1 has less than half of the conversions that Network_#2 at more than 90 clicks.

One thing you may notice is that on certain days, you may find that a network which has confirmed fewer conversions than another network may suddenly perform better than its counterpart. One can really only theorize why this occurs. But once you can determine which network performs better, you can choose which offer/network with which you would like to optimize.

One last thing I wanted to mention is something more of a bit of advice. But when it comes to deciding whether or not to move forward with a network on an offer, keep in mind two things: 1) networks typically reward loyalty. So if you speak with your AM, you can typically find a solution to even things out (like a payout bump) to level network performance. 2) Just because one offer may perform better on one network than another, that does not mean that all offers will perform at the same rate.

So don’t be so quick to pledge lifetime loyalty or dismiss an offer or network when you’re testing a campaign and remember that whenever possible, you should split test.