POF’s self-serve platform implements a CPM-based bidding system that does not take into account incremental bids, meaning what you bid is what you pay. If you have even run a few campaigns on POF, you must have wondered what a higher bid actually buys you.

We know that a higher bid is supposed to give you more volume and higher quality traffic (i.e. lower session depth traffic), but what is the magnitude of the effects? In this case study, we tackle the volume question. We’ll save quality for a later date.

Here is the data, followed by our interpretation: 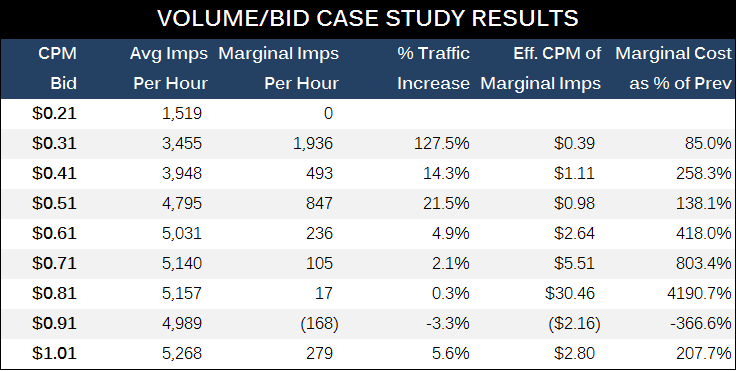 How the Data was Collected

The data was collected using the POF Traffic Volume Monitor over an 8 hour period from 12pm CST to 8pm CST on a Saturday. We used 4 different campaigns. These campaigns weren’t broad campaigns but they aren’t targeting micro-niches either. They all had frequency caps of 3 per visit and distributed traffic ASAP.

Bids were adjusted between $0.21 and $1.01 by increments of $0.10 every 15 minutes. When the campaigns reached $1.01, we would lower the bid down to $0.21 for the next 15 minute interval. Since we were testing bid prices over 8 hours, performing the test in this manner controlled somewhat for the variation of traffic over time of day.

Since we didn’t perform the test for days and days, there was some volatility over a smaller sample size as manifested through the non-smooth line, but all we’re looking for is a general trend.

How to Read the Data

Looking at the table, the “CPM Bid” of course indicates the CPM price points we tested.

“Avg Ims Per Hour” is the average number of impressions gained per hour at those bid levels.

“Marginal Imps Per Hour” is where the data starts getting interesting. It refers to the incremental amount of traffic gained from increasing the bid by $0.10. For instance, when bid was increased from $0.21 to $0.31, our data showed that the campaigns gained 1,936 impressions on average.

“% Traffic Increase” is the magnitude of marginal traffic received. For instance, when bid was increased from $0.21 to $0.31, traffic increased 127.5%, or more than doubled.

“Marginal Cost as % of Prev” refers to the increase in cost for the additional traffic gained by bidding $0.10 higher. For instance, when bid was increased from $0.21 to $0.31, the 1,936 additional impressions we received cost us 85% more than the first 1,519 impressions.

What does the data tell us?

We can see that there is a huge boost in traffic going from $0.21 to $0.31. We still see pretty good increases in volume up to $0.51. We still get small gains from $0.61 to $0.71, but we really don’t see any incremental traffic as we bid $0.71 and higher. That is, until we get to over $1. At $1.01 we see another increase in volume. We did not test any bids higher, but my hypothesis is that there is a clear divide between the average performing and broad-targeted campaigns, which bid in the $0.50’s and lower, and the niche-targeted, higher CTR campaigns, which bid over $0.70. Once you’re bidding over $1, you start to leave the majority of the pack behind, and the campaigns start to see more volume, beating out a majority of the campaigns. From this data, it looks like you shouldn’t be bidding higher than the $0.50’s unless you can bid over $1 as you start to see very little gain in traffic (only 4.9% more traffic from $0.51 to $0.61).

Based on this data, the general takeaway seems to be to stay in the $0.21 to $0.50’s range unless your campaign truly justifies a high bid greater than $0.91. Remember, we have not taken into account the quality of traffic and its effect on campaign performance, so when you make decisions for specific campaigns, you need to analyze the overall and marginal profitability of those campaigns. What we’ve uncovered here, however, can be used as a general rule.

We hope you found this experiment interesting and helpful. If you’d like to download a copy of the data from this case study, please do so below. It will give you a good idea as to how to go about doing similar analyses for your own campaigns, if you so choose.