POF Case Study: Cheap Clicks at a High Bid With the 960×110 Banners

Recently, the team over at Plenty of Fish unveiled the large-and-in-charge 960×110 banner. This banner is served in the same areas as the small ads as well as the wide banners and, while at first glance, it appears as though it’s just a slightly larger version of the current 728×90 banner, it seems to be a little more than that.

So, like a child with their unwrapped toy on Christmas morning, I got really excited to play with this new banner and began testing its utility immediately. I’m sure that we will provide many case studies surrounding the 960×110 banner in the future; for now however, I would like to share with you a couple of things I’ve already found.

The two things I wanted to test was how high I would have to bid to reach top placement, and what kind of CTR this behemoth could generate compared to the smaller banners. So in an attempt to eliminate as many variables as possible, I created a total of 4 campaigns.

The first campaign was composed solely of 960×110 banners.

The initial concept of the banners in this first campaign was to create the illusion that (3) separate 110×80 ads with (3) different headlines and (3) different body copy were being served to the user when in fact it was just one large banner. I created 20 ads like this and ran each ad until it had reached 10,000 impressions. From there, I paused the bottom 15 banners, moving forward with the top 5 banners to test further.

Next, I took all of the faux 110×80 ads within each of the 5 wide banners and created 3 separate 310×110 campaigns (1 campaigns for each headline/body copy used in the wide banners) consisting of 5 ads each resulting in a total of 4 campaigns:

Note* While I could have created 110×80 ads for the 3 campaigns, I didn’t want the ad appearance to differ between the small ads and the wide banners, thus hoping to reduce the amount of variables in my discoveries.

Much in the same way that we figured how to get top placement with the 728×90 banners, I monitored and recorded the session depth of both banner sizes after incrementally increasing the CPM bid until top banner placement was achieved. Below are the results 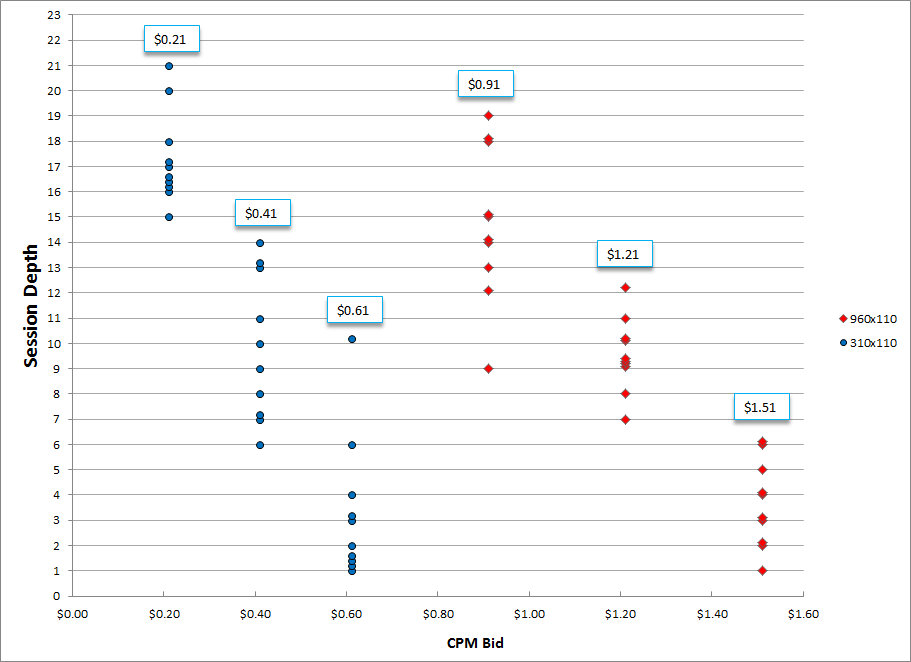 As you can see, top placement was not achieved until the bid was placed at $1.51, shown in the red. However, when given the same targeting criteria,  the small ads only required a bid of $0.61 to reach top placement Clearly, it is more expensive per impression to achieve top placement with the 960×110 banners than with the small ads. But if the results of the 728×90 banners were any indication of how larger banners require a higher bid, this was to be expected.

Still, I figured that these larger banners would have some value. The question still remained as to whether or not these wide banners would bring anything new to the table. I then decided to look into the performance of both banner sizes where I came across my second discovery…

I didn’t expect to find this when first looking at the data gathered while running these campaigns, but it turned out that while although I was bidding much higher for the 960×110 banners, I was getting clicks at one-third of the cost of the 310×110 banners.

Keeping in mind that the wide banners I used were just a composite of 3 “faux 110×80” ads, the wide banner didn’t include any flashy design features or utilize tons of white space. However, for whatever reason, users clicked on the wide banners for a campaign CTR of 0.221% while the small ad campaigns received an abysmal average of 0.024%. I’ll admit, the small ads looked terrible, and the purpose of their design and creation wasn’t to perform, so I figured they would bomb. But for some reason when combined with 2 other similar ads in the form of a 960×110 banner, clicks jumped up significantly. We could go on for days on theories regarding these results, but for now we’ll just accept them for face value. Ultimately, what we were left with was a final CPC of $0.48 for the wide banners and a total CPC of $1.41 for the small ads.

As for conversions, there were really only a few. With a total EPC of $0.27, the wide-banner campaign never became profitable, but considering how zero conversions were expected, I wouldn’t exactly call that a loss.

The major thing I wanted to discover with these new banners was whether or not they were just another hyped up banner size that POF released to lure in unsuspecting marketers or if they could bring some real value to the table. Ultimately, and I believe the data shows, these banners should definitely be making a huge splash in POF’s system. The clicks seem to be there, so they’re capable of grabbing the user’s attention; and while you may have to bid higher for better placement, the higher CTR will certainly make up for it.
But, as always, test and find out for yourself…