Thrive tracks the performance of custom variables such as keywords, geo-targets, site IDs, publishers, demographics, and much more from your traffic sources, but when you do something with those custom variables on those traffic source, such as blacklisting a particular underperforming keyword or increasing the bid of a well-performing geo target, there isn’t anything you could do to remind yourself in Thrive, until now.

For example, let’s say a custom variable you’re tracking are Adwords Keywords that you’re bidding on. Let’s say Thrive reports that a certain keyword has been performing very poorly on your traffic source.

You then go into your traffic source and blacklist this particular keyword so you don’t bid on it any further going forward. But, when checking stats in Thrive, you would later on forget that you blacklisted that keyword.

Now, we give you the ability to flag this keyword via the Thrive interface so that you will always know this site ID has been blacklisted.

To flag a custom variable, go to the Other Variables section of an individual campaign. Hover over any of your custom variables and click the little flag icon to flag: 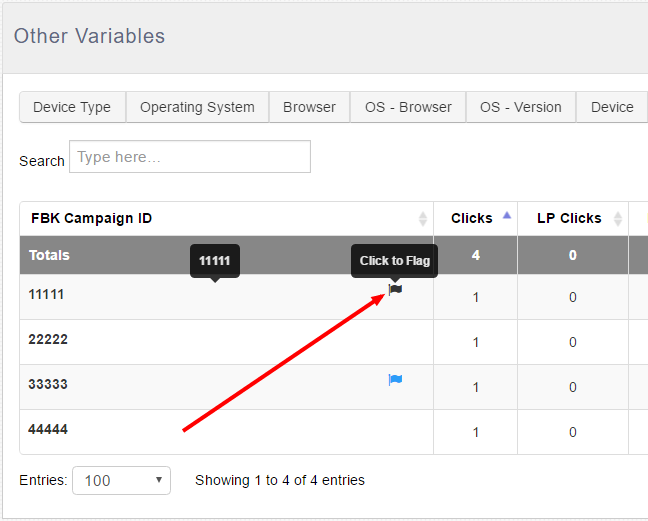 The little blue flag icon in the above screenshot would indicate a custom variable that was previously flagged, and you can un-flag it, if you’d like.

Here we have an example of flagging a blacklisted keyword, but you could use these flags for whatever purpose you wanted.

Still haven’t checked out Thrive? We’ve been continually improving our product to be the best of the best, so SIGN UP for an account now!