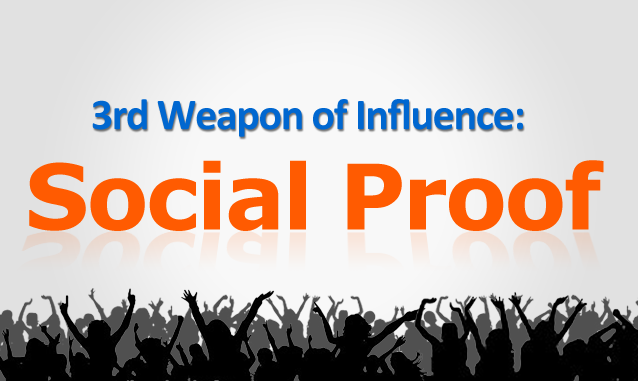 If you’ve read any of our posts about landing pages, you’re probably aware that social proof can be a powerful thing. But to truly harness the power of social proof, we need to understand when it’s used, and to what extent it can be effective.

Following our series on the 6 weapons of influence as illustrated in Dr. Robert Caldini’s, this post will show you how his breakdown of social proof can help you to create creatives and landing pages that will convert.

For those who are unsure about the effectiveness of social proof, refer back to any American sitcom up until the late 90’s. What you’ll hear (quite often) are the manufactured laughs of a pre-recorded audience in what are called “Laugh Tracks”. In most cases, these laugh tracks increased viewership by making the show seem funnier and more entertaining than it actually was. But how?

Laugh tracks are not the only things used to solicit our compliance in certain settings. Boastful displays of positive ratings, company reports of high numbers of customers served, and testimonials from authoritative sources are all devices used to show how other people are behaving positively to something and suggest that we should do the same.

The inability to conform to things around us has typically resulted in discrimination and ostracism. So when we notice that a lot of people are doing the same thing, we will easily follow suit because we figure they must know something that we do not. Of course, there are some characteristics of social proof that have certain affects on us.

In another one of his books, Caldini and his colleagues wanted to determine how effective social proof could be in deterring vandalism and theft in a park. What they found was that when signs with negative social proof (illustrating the prevalence of theft and vandalism in the area) were posted, criminal activity increased 300%.

The theory behind this phenomena was that people saw the signs and inferred that theft and vandalism was commonplace and thus okay. While the desired effect was to lower theft and vandalism by highlighting how much of an issue it is in the area, the sign encouraged them to do the same since so many other people were doing it already.

In his book, Caldini illustrates how social proof is even more effective when we can determine that the model group is similar to us. According to a study by Columbia University in the late 60’s, when people had been given a social cue from a US citizen to return a lost wallet, they attempted to return the wallet 70% of the time, while only 33% attempted to return the wallet when given a social cue from a non US citizen.

What This Means For Your Campaigns

Incorporating social proof into your landing pages or creatives will show your visitors how they should feel about your offer and what they should do.

Testimonials are a great way to show your visitors how other people are enjoying your offer, conveying that they will enjoy it as well. One study found that using images of people along with testimonials will increase trust and the efficacy of the testimonial. Furthermore, by using testimonials from people who look like your targeted demographic, you can increase the effectiveness of your social proof.

Caution You’ll want to refrain from using fake testimonials. If you’re running an affiliate offer where testimonials are not readily available, try to look for review sites of your offers. You may need the permission of the advertiser before using certain testimonials on your landing pages, but using reviews is better than making up your own fake testimonials.

Can’t find testimonials with images? Physical appearance isn’t the only device we use to measure similarity. With the help of a geo location script you can also create dynamic copy to convey that a number of other people in your visitor’s area have tried your offer and they should, too.

Maybe your offer isn’t large enough to garner attention from a large group yet. When you’ve got a smaller user base, there’s no need to skew numbers in the interest of conveying popularity. Instead, place a large emphasis on the similarities between current customers and your user.

The important thing to remember with social proof, is that when we are unfamiliar with a specific situation, we look outside ourselves and to others to determine what should be best for us. Placing an emphasis on similarities this way increases group belonging, and increases compliance.