6 Proven Weapons of Influence That Will Get You Conversions – Reciprocity

Influence is the ability to get someone else to behave in your favor. Once you’ve gained influence over an individual or group, you have the means to compel them to do pretty much anything. While influencing someone may seem simple, the concept can be complex. Understanding its pillars is key.

Dr. Robert Caldini has released many books on the subject of influence in an attempt to fully understand the complexities behind human behavior. His book Influence: The Psychology of Persuasion breaks down the mechanics of influence into 6 categories: Reciprocity, Commitment/Consistency, Social Proof, Authority, Liking, and Scarcity.

Considering the the number of copy-paste landing pages and creatives that I see everyday, a lot of people use these concepts without truly understanding them. Without proper understanding of why these techniques work, creating copy can become stagnant and adversely affect overall conversions.

While I highly recommend that anyone interested in marketing read his book, I’ve decided to provide you with a thorough breakdown of each one of the 6 weapons of influence provided in Dr. Caldini’s book for you. Let’s begin. 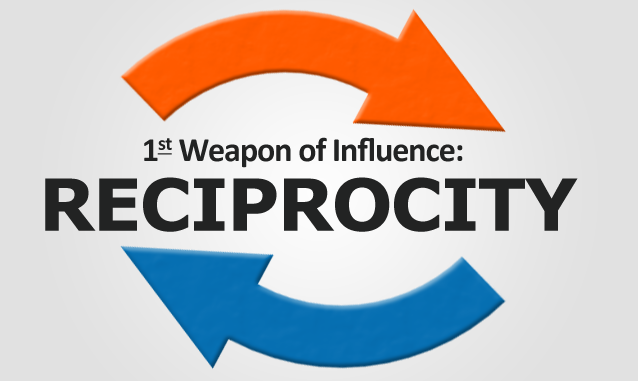 Caldini provides multiple anecdotal stories about reciprocity in his book. One story reflects the powerful nature of reciprocity that occurred on a global scale when poverty-stricken Ethiopia sent $5,000 of relief aid to Mexico after a devastating earthquake hit Mexico City in 1985. While the gesture left many in awe, Caldini later discovered that the money was sent to reciprocate aid that Mexico had provided Ethiopia 50 years prior, when Italy was invading Ethiopia.

Other examples of reciprocity are further illustrated when Caldini recalls his experiences with the Hare Krishna group and Boy Scouts along with some scientifically-conducted studies. As he describes his observations, Caldini provides some complementary techniques to the reciprocity rule.

A major driving force behind the reciprocity rule is fulfilling debt. It’s human nature to want to repay debt. When we receive a gift or favor from someone, we feel compelled to return that act and will go to great lengths to repay our debt and sometimes even overpay our debt; the absence of which will likely leave us feeling guilty or ashamed. An effective marketer will use this to their advantage and provide a small favor while requesting a comparatively larger favor in return.

We see this technique used with signs reading “free samples” in malls where the intended reaction is an obligation to buy the item you’ve just sampled.

Free trials have a similar affect. Not only does the offer of a free trial reduce sales friction by allowing the user to try a service before paying, it can also be used as a means to obligate prospective customers into buying the full product once the trial is over.

Among many others, companies like Hulu and Netflix use this technique to grow their number of users. 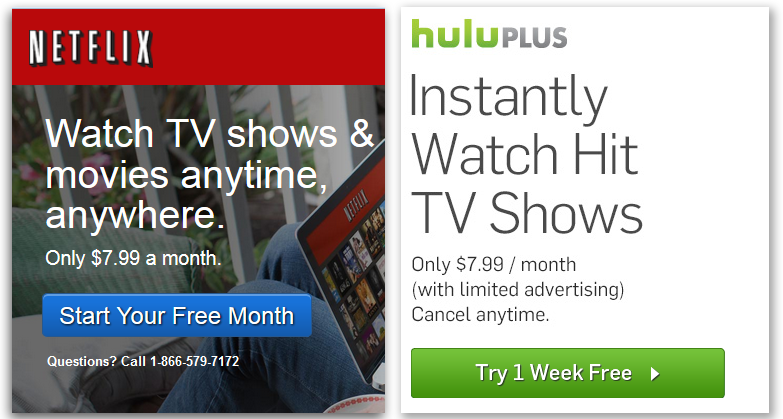 As you may have guessed, the initial favor/gift almost always has to appear genuine; once an individual feels they are being duped, they will either refuse the favor/gift to avoid the debt or no longer feel obligated to reciprocate the favor altogether.

Additionally, if the return favor is too large, the person in debt will feel genuinely unable to return the favor, and suddenly be relieved of any reciprocated obligation.

This highly-effective component of the reciprocity rule states that if an individual is first presented with a large request and reject it, they are many times more likely to then comply with a smaller request. It’s a simple form of faux negotiations.

Not only is the rejection-then-retreat (RTR) technique effective in getting an initial response of agreeing to something early on, it’s also an effective way to ensure that the other person feel further obligated live up to their end of the agreed favor and to continue to negotiate in further favors.

Caldini illustrates the effect of the RTR technique with a study where one group of students were asked to commit to a large favor which requested that they donate blood every 6 weeks for a few years and once rejected, agreed to a smaller favor of donating just 1 pint. Others were only asked to donate just one pint of blood.

The rejection-then-retreat technique is highly effective for 3 basic reasons:

It should be advised that when using the RTR technique, you may run the risk of completely losing the trust of your prospect thus preventing you from making future negotiations.

Reciprocity can be a versatile and effective weapon of persuasion. Creating “debt” by offering free gifts/favors is a great way to ensure future action, while using the RTR techniques can make your offer that much more appealing.

Be sure to check out our follow-up posts containing the 5 other proven weapons of influence and learn how to create truly compelling and persuasive copy.