After a couple of months of creating campaigns early in my POF career, while attempting to exclude iOS and Android, I accidentally created a campaign targeting ONLY iOS & Android. I realized soon after that what I previously thought was an idiot mistake was actually dumb luck. Follow along to find out why.

In a recent post I explained how to create mobile-compliant landing pages in an effort to increase volume and profit in POF. After that post, however, I had a lot of people ask me if it was really worthwhile to target and optimize mobile traffic on POF. So to follow up on that post, I compiled data obtained across numerous campaigns over the last month and a half to go into greater detail the kind of traffic you might be missing out on if you’ve been ignoring mobile targeting with your campaigns in POF. But, before I get too far in this post, keep in mind that the traffic I discuss in this post is all Web or Mobile WAP traffic only. None of the data here represents any App traffic. I want to mention this because while POF does have a mobile app, there haven’t been any efforts to monetize their app with advertising.

In an effort to quickly and easily present some basic numbers, I created two graphs which are displayed below. To truly explain how profitable mobile traffic on POF can be, in each graph I compare both mobile and web traffic side-by-side in terms of Volume, Clicks, Conversions, Conversion Rate (CVR), Earnings per Click (EPC), Cost per Click (CPC), and profitability or Return on Interest (ROI).
Below is the first graph, which addresses volume and CVR.

You’ll notice immediately that the campaigns in this case study had almost 5x as much web traffic as mobile traffic yielding more clicks and conversions for web traffic than mobile traffic. Next, after doing a little bit of math, you may notice that the CVR of web traffic is slightly greater than mobile traffic. With just the above data, it may seem that mobile targeting in POF isn’t worth that much of your time. But take a closer look and you can see that the CTR of mobile traffic (.206%) is higher than that of web traffic (.175%), making up for the lower CVR. Now, one may ask why the CTR would be higher but the CVR would be lower. One can only speculate on why this happens but one explanation is that when people are browsing the web on their phones, they are more likely to accidentally click on something (your creative) that they never intended to click on in the first place. Also, the lower CVR may just be a result of either an offer landing page that’s not mobile-compliant or is too complicated for a person using a phone. Either way, mobile-targeted campaigns will likely have a higher CTR than web campaigns.

But what about the cost, earning, and ROI of each targeted traffic? For that, I would like to direct you to the graph below: 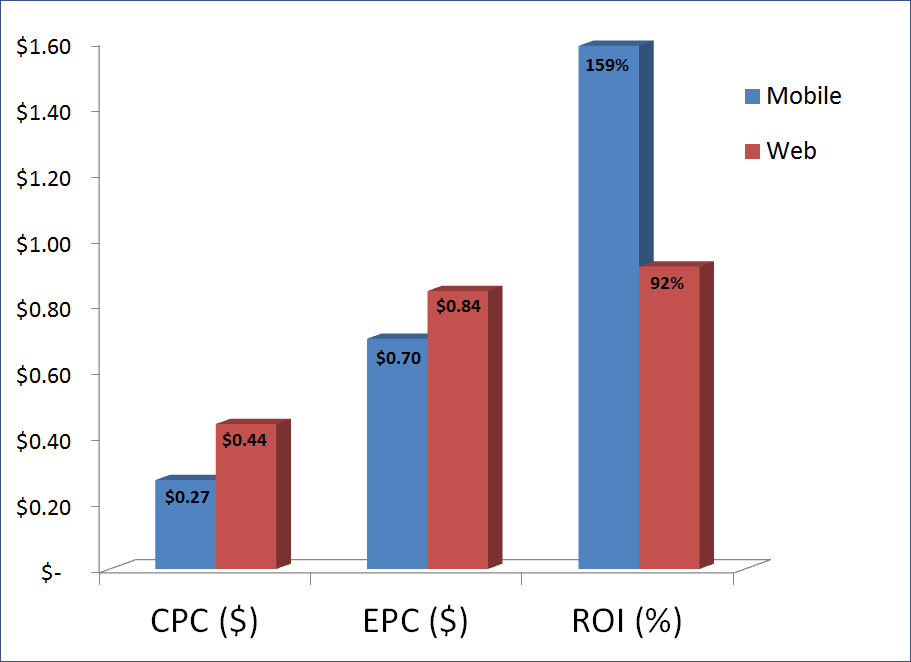 So What’s the Verdict?

Well, at first glance, it may seem not worth your while to target mobile traffic. Perhaps you would rather spend your time going after the greater dollar and only spend your time on web traffic and completely exclude mobile targeting in your POF campaigns. Personally, I like the idea of finding multiple small bits of treasure where I thought they never before existed. Sure, there’s less volume, but by simply splitting campaigns between mobile and web targets and adjusting bids, you may find monetizing the extra volume to be quite effortless. After all (after doing some math with the above data) while targeting mobile devices we find a little over $13,000 in revenue that otherwise never would have been obtained had mobile targeting been excluded. While that may not buy you a new house, it’s not just chump change.

So don’t be afraid to split your traffic and optimize your mobile traffic in POF. You may find some more money to squeeze out of your already profitable campaigns!